After WHO setback, Taiwan president to press for global participation 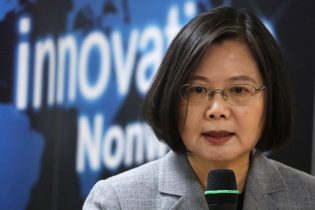 TAIPEI (Reuters) – Taiwan will strive to actively participate in global bodies despite its failure to attend this week’s key World Health Organization (WHO) meeting, and will not accept being belittled by China, President Tsai Ing-wen will say on Wednesday.

Tsai and her Democratic Progressive Party won January’s presidential and parliamentary elections by a landslide, vowing to stand up to China, which claims Taiwan as its own, to be brought under Beijing’s control by force if needed.

China views Tsai, who will be sworn into office for her second and final term on Wednesday, as a separatist bent on formal independence for Taiwan. She says Taiwan is already an independent state called the Republic of China, its official name.

Tsai will say at her inauguration that Taiwan will seek to “actively participate” in international bodies and deepen its cooperation with like-minded countries, generally a reference to the United States and its allies, according to an outline of her speech provided by Presidential Office spokesman Alex Huang.

Taiwan sees the need for participation in WHO as all the more urgent because of the coronavirus pandemic, which was first reported in China.

Taiwan is locked out of most global organisations like the WHO due to the objections of China, which considers the island one of its provinces with no right to the trappings of a sovereign state.

Despite an intense lobbying effort and strong support from the United States, Japan, Britain, Germany, Australia, New Zealand and others, it was unable to take part in this week’s meeting of the World Health Assembly.

On relations with China, Tsai will reiterate her commitment to peace, dialogue and equality, but that Taiwan will not accept China’s “one country, two systems” model that “belittles” Taiwan.

China uses this system, which is supposed to guarantee a high degree of autonomy, to run the former British colony of Hong Kong, which returned to Chinese rule in 1997. It has offered it to Taiwan too, though all major Taiwanese parties have rejected it.

Tsai will also pledge to speed up the development of “asymmetric warfare” capabilities, and boost renewable technologies in a move to position Taiwan as a hub of clean energy in the Asia Pacific.

President Donald Trump’s friends and allies are increasingly doing what he will not: acknowledging the reality that Joe Biden will be the next President of the United States.