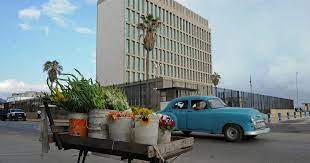 More than a dozen CIA officers serving in multiple overseas locations have returned to the U.S. to seek care this year after reporting symptoms consistent with “Havana Syndrome,” the mysterious, debilitating illness that is thought to have already afflicted scores of U.S. personnel since 2016, according to current and former U.S. officials and people familiar with the matter. The new suspected incidents occurred in the early months of 2021, and at least one happened as recently as March, according to three sources.

In many of the cases, the officers felt so sick, so suddenly, that they required emergency medical evacuation, two people familiar with the matter said. The recent incidents have taken place on three continents, according to one of the people.

The reported cases are the latest in what lawmakers of both parties have said is an “increasing” pattern of suspected “attacks” on U.S. officials — which have included diplomats, intelligence officers and military personnel — and which have prompted several government investigations at the CIA, State Department and Pentagon.

A White House spokesperson said the cause of the incidents is an area of “active inquiry,” and that the National Security Council (NSC) has been coordinating a “government-wide effort” since the start of the administration to determine who is responsible and ensure those affected receive medical evaluations and proper care.

“As part of the inquiry, the NSC is coordinating a full review of intelligence reporting to ascertain whether there may be previously unreported incidents that fit a broader pattern,” the spokesperson said. “We cannot address additional specifics at this time, but this remains a priority and we are bringing the U.S. government’s resources to bear to get to the bottom of this.”

Both Republican and Democratic lawmakers recently expressed frustration with the CIA in particular for what they see as obfuscation of the scope and severity of a problem whose existence has been known for years.