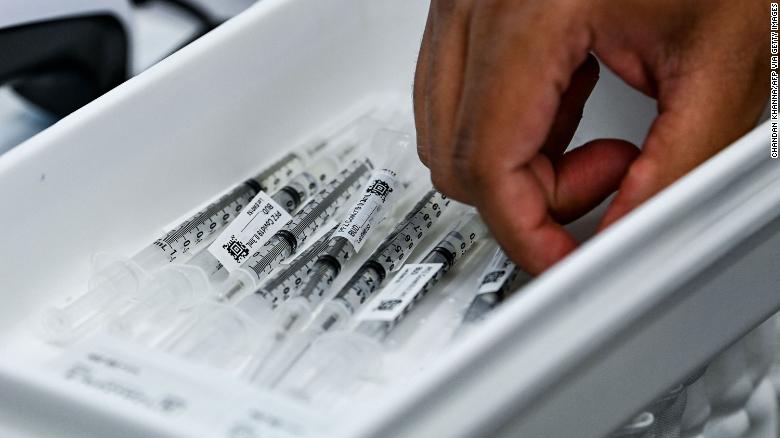 Biden hits 200 million vaccine doses. The next 200 million will be a lot harder Zach Wolf

It’s no longer supply, it’s demand. This, right now, is the moment when the government stopped the triage effort on vaccines and started trying to convince the skeptical and the unwilling to roll up their sleeves.

“To put it simply, if you’ve been waiting for your turn, wait no longer,” President Joe Biden told Americans in remarks Wednesday. “Now is the time for everyone over 16 years of age to get vaccinated.
The US has been cruising on vaccines. Biden proudly announced Wednesday that the country has put 200 million shots in American arms during his administration. More than a quarter of the country has been fully vaccinated and 40% has gotten one shot. More than half the population over the age of 18 has gotten one shot.
Then he made an important pivot, trying to sell the vaccine to people who don’t yet want it with a multi-pronged sales pitch:
“Go get your vaccine before the end of May,” he implored. “We can do this.”
Biden has shown a knack for setting achievable goals and taking credit for them, which is either small-minded policymaking or really good politics, depending on your perspective.
That’s how he was able to brag that the first 200 million shots during his administration were achieved days ahead of schedule. The full total is higher when you factor in the many millions who were vaccinated in the final days of the Trump administration.
The next 200 million vaccine shots are expected to be much harder than the first. That’s despite the fact that all Americans over 16 should now be eligible.
The Kaiser Family Foundation overlaid the number of people who have been vaccinated according to the Centers for Disease Control and Prevention with its polling on how many Americans are willing to get the shot.
Here’s the math:
Bottom line. The universe of people willing to get vaccinated who haven’t yet received a shot is shrinking, and in the coming weeks there will be a predicted shift from people clamoring to get vaccinated to the government figuring out how to get to the 39% or so who are skeptical or otherwise unwilling to roll up their sleeves.
Some are youngsters who think they’re invincible. Some are conservative and skeptical of the government. Some are people of color who are skeptical for different reasons. But the pressure-applying portion of this is just getting started.
Who is least likely to get vaccinated? CNN’s Harry Enten wrote that we tend to focus on racial and partisan divides, but he looks at the polling and says that misses an important point:
One under-discussed difference in vaccination uptake that is particularly troubling is that younger Americans are less likely than older Americans to claim they have or will get vaccinated. This is dangerous because younger Americans seem to be the ones most likely to spread the virus.
Just 49% of those under the age of 30 in last month’s Kaiser Family Foundation survey told the pollster that they would be getting a vaccine as soon as possible or had already gotten one. That’s below the 61% overall and well below the 81% of senior citizens.
The hesitancy among young people could play a role in slowing herd immunity and may explain why, despite the growing number of vaccines, the number of Covid infections remains high.
Enten again: The fact that younger people have been slower on the vaccine uptake is worrisome because they are also the least likely to socially distance themselves. According to an average of March Axios/Ipsos polls, adults under the age of 30 were on average 7 points less likely to say they were socially distancing than adults overall.
Biden spoke directly to the youngsters out there when he said the vaccine could not only save their lives, but also help stop the spread in the community and “save your grandmother’s life.”
Grandparents out there. You may be more likely to be reading this than the youngsters. Biden could have also told you you need to call up your grandkids to get this done.
Replay: When we’ll know it’s time to get back to normal. Here’s a good place to replay that standoff between Dr. Anthony Fauci and Republican Rep. Jim Jordan of Ohio this week over when Covid restrictions should end.
“My message, Congressman Jordan, is to get as many people vaccinated as quickly as we possibly can to get the level of infection in this country low, that it is no longer a threat,” Fauci said. “That is when.”
Related: How to speak to someone who’s hesitant to get vaccinated.
Should you advertise your vaccination? I read with interest this CNN analysis about the pros and cons of sharing your vaccination status. This plays into the same murky territory as the immunity verifications (also known as vaccine passports) that are so controversial but could also be a valuable tool for opening up society.
Weighing the privacy issues with the vaccine hesitancy issues, I tend to think everyone should be shouting their vaccine status from the rooftops.
The next goal: Independence Day. Biden is not, generally, in the business of setting unattainable goals, so it’s a good bet that his goal of having the US closer to normal life by July Fourth is not completely crazy.
Back in March, a CNN analysis of vaccine data suggested the US could reach herd immunity by June if vaccinations kept pace. The test now will be keeping vaccines at pace after the willing population is saturated with vaccine.