Border security a common concern for Pakistan and Iran: Rouhani

Border security a common concern for Pakistan and Iran: Rouhani

Iranian president calls for increased cooperation with neighbouring Pakistan on managing their border. 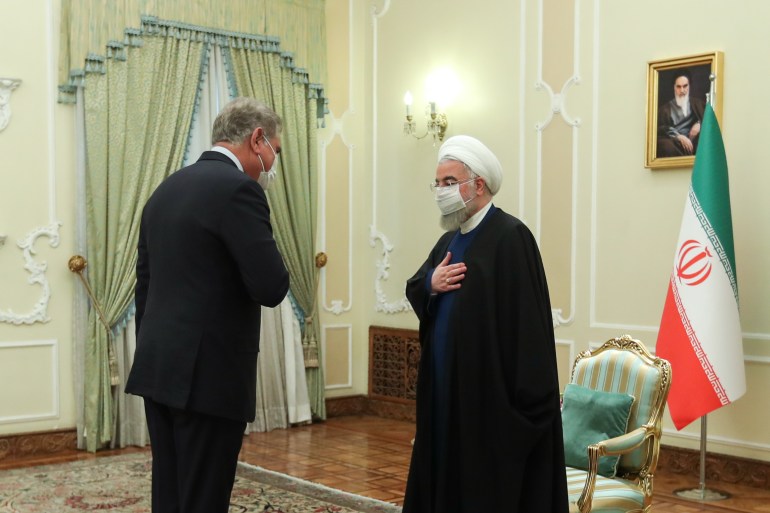 Islamabad, Pakistan – Iranian President Hassan Rouhani has called for increased cooperation with neighbouring Pakistan on managing the two countries’ border as well as the Afghan peace process, his office says.

“Security is a common concern of the two countries, and the development of relations in this regard is imperative,” Rouhani said, according to a statement released by his office.

The Pakistan-Iran border is roughly 800km (497 miles) long along Pakistan’s western and Iran’s eastern side, and has been the site of several security incidents, mainly targeting Iranian forces, in recent years.

On Wednesday, the two countries inaugurated a third border crossing at Mand-Pishin as part of an initiative to increase trade between the neighbours.

“The opening of international border crossing point at Mand-Pishin would facilitate pedestrian movement and enhance bilateral trade,” said a statement from Pakistan’s foreign ministry after Qureshi’s meeting with President Rouhani.

Rouhani also criticised the presence of United States’ troops in Afghanistan, calling it detrimental to regional security, and asking for greater cooperation with Pakistan on the stalled Afghan peace process.

“Iran and Pakistan, as two most important and effective neighbouring countries of Afghanistan, should increase cooperation and interaction for the development of the peace process in the country,” Rouhani said.

“[Zarif] said that the three existing border markets and the six that are scheduled to be established will boost the two countries’ border trade and have positive effect on the wellbeing of the region’s peoples,” the official Iranian IRNA news agency said.

Speaking at an event at the Pakistani embassy in Tehran, Qureshi also called upon Iran to join a campaign by Pakistani Prime Minister Imran Khan to combat Islamophobia.

“It was agreed to move jointly on the issue of Islamophobia and preserving the respect of the Holy Prophet (Peace Be Upon Him).”

This week, Prime Minister Khan called on Muslim countries to unite in calling on European and other countries to criminalise insulting Islam’s Prophet Muhammad.