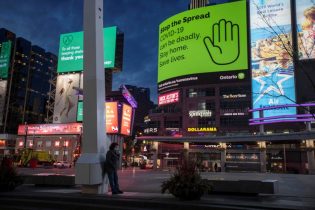 By David Ljunggren and Kelsey Johnson

OTTAWA (Reuters) – Canada’s coronavirus death toll is set to soar from more than 500 currently to as high as 22,000 by the end of the pandemic, health officials said on Thursday, while the economy lost a record 1 million jobs last month.

Prime Minister Justin Trudeau said the country would not return to normal until a vaccine is developed, which could be as long as 18 months.

Health officials said the two most likely scenarios showed between 11,000 and 22,000 people would die. The total number of positive diagnoses of COVID-19, the respiratory illness caused by the novel coronavirus, ranged from 934,000 to 1.9 million.

They said they expected between 500 and 700 people in Canada to die from the coronavirus by April 16. There have been nearly 21,000 positive diagnoses so far.

Chief public health officer Theresa Tam said it was crucial that people continued to stay at home as much as possible.

“While some of the numbers released today may seem stark, Canada’s modeling demonstrates that the country still has an opportunity to control the epidemic,” she told a briefing.

Howard Njoo, Tam’s deputy, said if all went well, the first wave of the outbreak could end by July or August. But he emphasized there would be subsequent smaller waves.

Local governments across Canada have ordered non-essential businesses shut to combat the spread, throwing millions out of work.

Canada lost a record-breaking 1 million jobs in March while the unemployment rate soared to 7.8%, Statistics Canada said, adding that the figures did not reflect the real toll.

“This was about as bad as it could be,” said Derek Holt, vice president of capital markets economics at Scotiabank.

More than 5 million Canadians have applied for all forms of federal emergency unemployment help since March 15, government data showed, suggesting the real jobless rate is closer to 25%.

Energy is among the hardest-hit sectors, as the pandemic cuts oil demand. OPEC and allies agreed to cut output by 10 million barrels per day, and Alberta’s premier said his province had not been asked to contribute to the curtailments.

Trudeau told reporters the country was “at a fork in the road between the best and the worse possible outcomes,” predicting that once the first wave was over, the economy could partially be reopened.

“Normality as it was before will not come back full on until we get a vaccine for this and … that could be a very long way off.”

The Liberal government has announced a range of measures to help businesses totaling around C$110 billion ($78.3 billion) in direct spending, or 5% of gross domestic product.

Trudeau’s government recalled the House of Commons to meet on Saturday and vote in limited numbers on measures including a wage subsidy worth C$73 billion to soften the economic blow.

named a suspect Saturday in the attack on its Natanz nuclear facility that damaged centrifuges there, saying he had fled the country “hours before” the sabotage happened. While the extent of the damage from...

From cover-up to propaganda blitz: China's attempts to control the narrative on Xinjiang

The statement — made in response to ongoing calls for a possible boycott of the 2022 Beijing Olympics — represents the culmination of a long evolution of China’s official narrative regarding its...

“We do not support, and do not think it’s at all helpful, that Iran is saying it’s going to move to enrich to 60%. It is contrary to the agreement,” Biden said during a news conference in the...