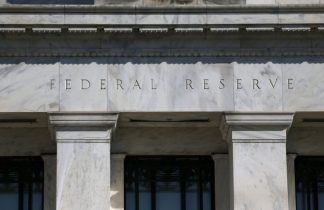 Prices in the $3.8 trillion market where states, cities, schools and other issuers sell debt, ticked higher in the wake of the Fed’s announcement, according to Greg Saulnier, Municipal Market Data’s (MMD) managing analyst. Yields tumbled 6 to 10 basis points on MMD’s benchmark triple-A scale.

Taxes that states and localities bring in, particularly on personal income and sales, are expected to drop due to massive layoffs and falling consumer spending as businesses and services are shuttered to curb the virus’ spread.

Earlier on Thursday, the central bank said it will pump up to $500 billion into the governments, which are on the front lines of the health battle.

Under the plan, the Fed will directly buy municipal bonds with maturities of up to two years issued by states, as well as counties with more than 2 million residents and cities of more than 1 million. Along with all 50 states, entities that would qualify include 10 cities, 13 counties and Washington, D.C., according to the Fed.

Gary Pollack, managing director of fixed-income at Deutsche Bank Private Wealth Management in New York, said the Fed was throwing a cash-flow lifeline to the governments.

“It’s not going to resolve all the issues for municipal governments, but it’s something, and at this point in time, something’s better than nothing,” he said.

The Fed’s move should prevent a wave of state and local government cash-flow borrowing flooding the already battered market, according to Tony Rodriguez, head of fixed income strategy at Nuveen.

“That’s very good in reducing some of the potential stress in the market of this massive supply,” he said.

The normally sedate muni market was hit with huge price swings in prior weeks amid a liquidity crisis that eased after the Fed took action to bolster the short-term secondary market.

“We believe that municipalities will tap this program aggressively to address their liquidity needs, but longer-term the challenges are quite pressing as we expect tax revenues of states and local municipalities to take a $350 billion or even larger hit,” Barclays wrote in Thursday’s Municipal Weekly report.

Saulnier said the Fed’s move “might help shore up some credit issues too if states and localities can get their essential needs met this way.”

The $2.3 trillion federal CARES Act, aimed at mitigating detrimental effects on the economy, allocated $150 billion to cover state and local virus-related expenses. This week, Democratic leaders in Congress called for an additional $150 billion for the governments.

(Reporting by Karen Pierog in Chicago, additional reporting by Howard Schneider in Washington; Editing by Alden Bentley and Matthew Lewis)