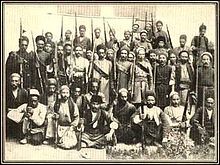 Iran Constitutional Revolution also known as the Constitutional Revolution of Iran, took place between 1905 and 1911. The revolution led to the establishment of a Parliament in Iran during the Qajar Dynasty.
The Revolution opened the way for cataclysmic change in Iran, heralding the modern era. It saw a period of unprecedented debate in a burgeoning press. The revolution created new opportunities and opened up seemingly boundless possibilities for Iran’s future. Many different groups fought to shape the course of the Revolution, and all sections of society were ultimately to be in some way changed by it. The old order, which King Nassereddin Shah Qajar had struggled for so long to sustain, finally died, to be replaced by new institutions, new forms of expression, and a new social and political order.

Muzzafir al-Din Shah Qajar signed the Constitution 1906 but he died shortly after and was replaced by Mohammad Ali Shah. The latter abolished the constitution and bombarded the Parliament with the Russian and British support in 1908. This led to another pro-constitutional movement. The constitutionalist forces marched to Tehran, forced Muhammad Ali Shah’s abdication in favor of his young son Ahmad Shah Qajar and then re-established the constitution in 1909. The several major events in Iran in 1921, which eventually led to the establishment of the Pahlavi Dynasty as the ruling house of the country in 1925. On December 12, 1925, Iran’s parliament amended Iran’s constitution of 1906–1907 to replace the Qajar dynasty (1797–1925) with the Pahlavi dynasty as the legitimate sovereigns of Iran.

With the first provision (the fundamental law) signed by Muzzafir al-Din just days before his death, Iran saw legislative reform vital to their goal of independence from British and Russian imperialism. The three main groups of the coalition seeking a constitution were the bazaar merchants and a small fraction of radical reformers. These groups shared the goal of ending corruption and stopping the dominance of foreign powers. Revolutionaries argued that role of the shah was once again being used to keep the Shah, Qajar, and the other aristocrats wealthy at the expense of surrendering the country’s resources and economy. They argued that whilst Iran’s oil industry was sold to the British, tax advantages on import/export and manufactured textiles destroyed Iran’s economy formerly supported by bazaar merchants. Muzzafir al-Din accumulated a fortune in foreign debt while selling off assets to repay the interest, instead of investing in Iran. This rift founded Iran’s constitutional revolt. The fundamental law gave the elected legislature a final approval over all loans, concession, and budget. The Constitution in its original format was the most secular and first in the entire region. The power was diverted from the shah with the supplementary fundamental law passed a few days later giving power over appointing ministers, and later under extreme pressure and threats of violence from the clergy a committee of five clergy was introduced to confirm new laws abide by the shari’ah.

In 1907 Britain and Russia capitalized on Iran’s weak government and signed the entente which divided Iran among the two, leaving a neutral zone in the center of the country. The end of this constitutional period came when members of the Majlis in the remaining neutral zone of Tehran dissolved under the issue of equal rights for non-Muslims, Russia then invaded Tehran and captured the city. While Iran did gain a constitution, the goal of Iranian independence was not achieved by the revolts.

Weakness and extravagance continued during the brief reign of Muzzafir al-Din Shah Qajar (1896–1907). He often relied on his chancellor to manage his decentralized state. His dire financial situation caused him to sign many concessions to foreign powers, on an expanding list of trade items ranging from weapons to tobacco. The established noble classes, religious authorities, and educated elite began to demand a curb on royal authority and the establishment of the rule of law as their concern over foreign, and especially Russian, influence grew.
He had also taken out several major loans from Russia and Britain to pay for his extravagant lifestyle and the costs of the central government. In 1900 the Shah financed a royal tour of Europe by borrowing 22 million rubles from Russia. Iranian customs receipts served as collateral.

In 1905 protests broke out over the collection of Iran tariffs to pay back the Russian loan for Mozaffar ad-Din Shah’s royal tour. In December 1905, two Persian merchants were punished in Tehran for charging exorbitant prices. They were bastinadoed (a humiliating and very painful punishment where the soles of one’s feet are caned) in public. An uprising of the merchant class in Tehran ensued, with merchants closing the bazaar. The clergy following suit as a result of the alliance formed in the 1892 Tobacco Rebellion.

The two protesting groups sought sanctuary in a mosque in Tehran, but the government violated this sanctuary and entered the mosque and dispersed the group. This violation of the sanctity of the mosque created an even larger movement which sought refuge in a shrine outside Tehran. On January 12, 1906 the Shah capitulated to the demonstrators agreeing to dismiss his prime minister and to surrender power to a new “house of justice,” (the forerunner to the parliament). The Bast (protesters who take sanctuary in mosques) returned from the mosque in triumph, riding royal carriages and being hailed by a jubilant crowd.

In a scuffle in early 1906 the Government killed a seyyed (descendant of the prophet Muhhamed). A more deadly skirmish followed a short time later when Cossacks killed 22 protesters and injured 100. Bazaar again closed and went on strike, a large number of clergy took sanctuary in the holy city Qom and went to the British Embassy which agreed to offer clergy protection.

In the summer of 1906 approximately 12,000 men camped out in the gardens of the British Embassy. Many gave speeches, many more listened, in what has been called a `vast open-air school of political science` studying constitutionalism. It is here that the demand for a majles (parliament; also means gathering in Persian; pronounced “Madj-less”) was born, the goal of which was to limit the power of the Shah. In August 1906, Mozaffar ad-Din Shah agreed to allow a parliament, and in the fall, the first elections were held. In all, 156 members were elected, with an overwhelming majority coming from Tehran and the merchant class.

October 1906 marked the first meeting of the majles, who immediately gave themselves the right to make a constitution, thereby becoming a Constitutional Assembly. Iran Constitution 1906 was written by Hassan Pirnia, Hossein Pirnia, and Ismail Mumtaz. It divides into five chapters with many articles that developed over several years. The Belgian constitution, like the constitutions of other European states, served as a partial model for the Iranian constitution and in its original format very secular and unique to the region.

The Shah was getting old and sick, and attending the inauguration of the parliament was one of his last acts as king. Mozaffar ad-Din Shah’s son Muhammad Ali, however, was not privy to constitutionalism. Therefore, they had to work fast, and by December 31, 1906 the Shah signed the constitution. The Shah was from there on “under the rule of law, and the crown became a divine gift given to the Shah by the people.” Mozaffar ad-Din Shah died five days later.