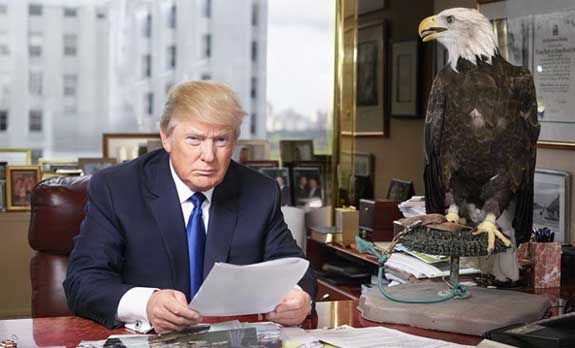 Date: March 19, 2019
To: The Honorable Donald J. Trump The President of the United States of America

The Honorable President Trump: As more than 190 Million people along with Iranians from nineteen different nations around the world celebrate the first day of Spring with the sun illuminating directly over the equator on equinox, majestically, evenly divided between North and South Hemispheres; please accept our sincerest congratulations and warm wishes to you and your great nation, the people of America, for Nowruz 2019. During the past three years you have spoken directly to Iranians and for that you have been nicknamed President of Hearts and Trump the Lion Heart. Iranians applaud you and your administration, for promises kept and tireless work to Make America Great Again. Meanwhile painfully witnessing our beloved Iran fallen as a Failed State into hands of occupying regime ravaging Iranians’ resources. Indeed, Iranians greatly appreciate Secretary Pompeo’s remarkable 48page report “Outlaw Regime” thoroughly enlisting Islamic Republic’s Forty Years of Failure resume. Occupying apartheid regime continues ruthless oppression of innocent civilians, least of which is to limit access to internet. Despite, Iranians have showed great courage through civil disobedience in many ways and have tried to uprise against the evil of theocratic kleptocracy of the Islamic Republic. Only a brief glance at Islamic Republic’s constitution and motto to rule the “Islamic world” is testimony to violating international treaties. In light of escalating Islamic extremism that caused nearly 84,000 deaths, only in 2017,spreading hate and division, gruesome terror attacks have now reached yet another continent. Iranians want an end to Islamic Republic occupying regime destructive behavior that is bloodied with many nations along with the brave American Soldiers’ blood who courageously sacrificed their lives to help the struggling Afghan and Iraqi people in the fight against radical Islamic terrorism. Iranians forewarn global stability and security is dependent on empowering Iranians to end Islamic Republic Failed State through Iranians’ own devices. Prior to 1979, all United States Presidents allied with Iran’s Constitution 1906 allowing our nations to be best allies and demonstrate exemplary relations model for all nations,while maintaining peace and stability for the longest period in current world history.

After many years of research and opposition struggle with extremely complicated and difficult circumstances working under Islamic Republic reign of terror, the least costly and best route has always been too close to see. Most important and integral part of this research is to be aligned with legalities, Iranian culture while reflecting Iranians’ voices from inside Iran as well as Iranians’ uprising since December 2017.Here, we come forth with a Real Solution to declare Iran’s Constitution 1906 as a valid and legal document with potential to be updated in language and form like any other constitution. Iran’s Constitution 1906 is woven intricately into Iranians’ pride and history and will be the least costly and best path to Secular Democracy for Iran. We believe through utilizing Constitution 1906, a government in exile from Iranians inside Iran and abroad can be formed formally to fill the vacuum of the Failed State. When in Iran, a Free and Fair election for a Constitutional Parliament will be held to update the Constitution to secular democracy. Subsequently, a referendum will decide the form of the government by Iranians for Iran.
As past is prologue, Iranians have been the best allies of the Free World and will ensure stability of the most volatile region of the globe only if allowed trusted representation with their own devices. With great aspirations, Iranians welcome Nowruz 2019 and wish to embrace peace with all free and freedom loving nations, again.