Federal health officials called for a halt in the use of the company’s coronavirus vaccine while they study serious illnesses that developed in six American women. 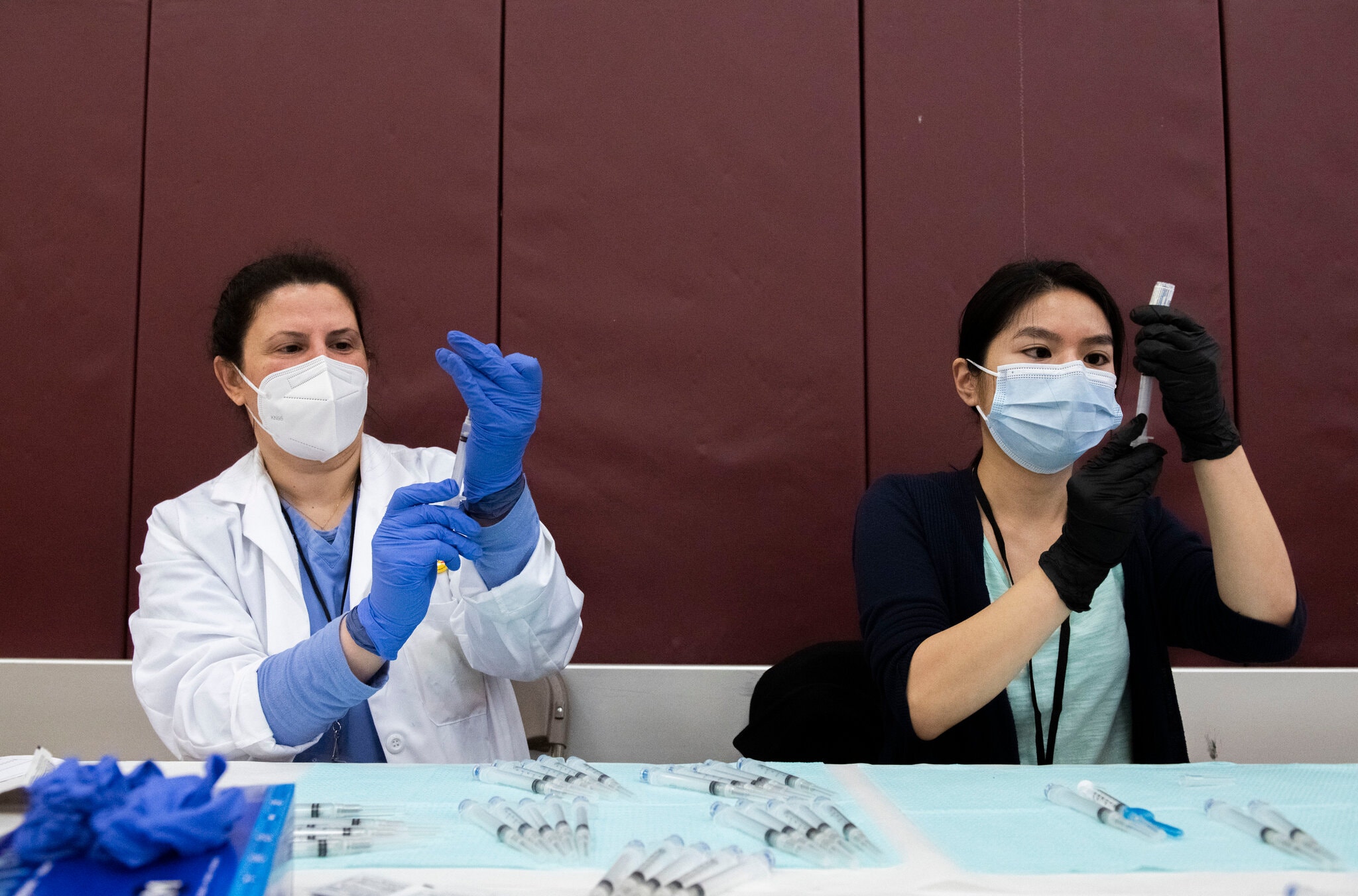 Pharmacists prepared syringes with the Johnson & Johnson vaccine in Detroit on Monday. More than seven million people in the United States have received the vaccine.Credit…Nicole Hester/Ann Arbor News, via Associated Press

WASHINGTON — Injections of Johnson & Johnson’s coronavirus vaccine came to a sudden halt across the country on Tuesday after federal health agencies called for a pause in the vaccine’s use as they examine a rare blood-clotting disorder that emerged in six recipients.

All six were women between the ages of 18 and 48, and all developed the illness within one to three weeks of vaccination. One woman in Virginia died, and a second woman in Nebraska has been hospitalized in critical condition.

More than seven million people in the United States have received Johnson & Johnson shots so far, and another 10 million doses have been shipped out to the states, according to data from the Centers for Disease Control and Prevention.

“We are recommending a pause in the use of this vaccine out of an abundance of caution,” Dr. Peter Marks, the director of the Food and Drug Administration’s Center for Biologics Evaluation and Research, and Dr. Anne Schuchat, the principal deputy director of the C.D.C., said in a joint statement. “Right now, these adverse events appear to be extremely rare.”

While they framed the move as a recommendation to health practitioners, the impact was immediate. By Tuesday evening, every state, the District of Columbia and Puerto Rico had announced a pause in Johnson & Johnson vaccine injections.

The same went for the U.S. military, federally run vaccination sites, and CVS and Walgreens, two pharmacy giants that participate in the federal program, officials said. Rite Aid, Walmart and Publix also announced that they had paused Johnson & Johnson injections.

Beyond American shores, Johnson & Johnson said it would delay the rollout of its vaccine in Europe, where several countries were poised to start administering it this week. South Africa, devastated by a more contagious variant of the virus that emerged there, also suspended use of the vaccine. Australia announced it would not purchase any doses.

The Biden administration tried to portray itself as well prepared for the setback. President Biden said he would meet his goal to have enough doses to vaccinate every American adult who wanted it by the end of next month.

“There is enough vaccine, that is basically 100 percent unquestionable, for every single, solitary American,” he insisted.

The reaction prompted an intense debate among public health experts about whether guarding against such a rare disorder was worth the cost. Scores of vaccine appointments were canceled this week, and some public health officials feared that by fueling vaccine hesitancy and conspiracy theorists, the pause could prompt fewer Americans to get vaccinated — and expose them to far more risk.

Others said the F.D.A. and the C.D.C. simply had no choice.

“It’s incredibly challenging, but to ignore it would have been worse,” said Rachael Piltch-Loeb, an expert in health risk communication at the N.Y.U. School of Global Public Health. If the public suspected that the government was concealing serious potential side effects, she said, far more people might decide against vaccination.

Dr. Janet Woodcock, the acting commissioner of the F.D.A., said at a news conference that the pause might last only “a matter of days,” although she said that depended on “what we learn in the next few days.” Dr. Schuchat said the pause was enacted partly to “prepare the health care system to recognize and treat patients appropriately.”

Scientists with the F.D.A. and the C.D.C. will jointly examine possible links between the vaccine and the disorder and determine whether the F.D.A. should continue to allow emergency use of the vaccine for all adults or modify the authorization, possibly by limiting the vaccine to certain population groups. An emergency meeting of the C.D.C.’s outside vaccine advisory committee has been scheduled for Wednesday.

Despite Mr. Biden’s assurance, the pause will complicate the nation’s vaccination efforts at a time when many states are confronting a surge in new cases and seeking to address vaccine hesitancy. Regulators in Europe and elsewhere are concerned about a similar issue with another coronavirus vaccine, developed by AstraZeneca and Oxford University researchers.

At the news conference, Dr. Marks drew a link between the two vaccines, saying the clotting cases were “very, very similar.” The vaccines are based on similar technology, but AstraZeneca’s has not yet been authorized for emergency use in the United States.

The vast majority of the nation’s vaccine stock comes from two other manufacturers, Pfizer-BioNTech and Moderna. Those two vaccines use a different technology than Johnson & Johnson’s and AstraZeneca’s. More than 180 million doses of Pfizer and Moderna have been administered, according to the C.D.C.’s latest statistics, and federal officials stressed on Tuesday that they had seen no evidence of the blood clots that led to the pause of the Johnson & Johnson vaccine — or of any other significant safety concern.

The decision is a fresh blow to Johnson & Johnson. Late last month, the company discovered that workers at a Baltimore plant had accidentally contaminated a batch of its vaccine, forcing the firm to throw out millions of doses. With federal certification of that factory in doubt, Johnson & Johnson’s shipments dropped to one-fourth or less of what had been expected, a severe disappointment to White House and state officials.

Jeffrey D. Zients, the White House coordinator of the pandemic response, said that the federal government was still shipping out 28 million Pfizer and Moderna doses this week and that about three million shots were being administered daily.

But the White House had been hoping for an even better showing. At one point this spring, officials were planning on weekly shipments of more than four million doses of Johnson & Johnson vaccine beginning this month.

Because Johnson & Johnson is one dose and easily stored, it was destined for specialized vaccine outreach programs. In Colorado and California on Tuesday, mobile vaccine clinics in rural areas were canceled. In Chicago, vaccination events for restaurant employees and aviation workers were postponed indefinitely. At colleges in Ohio, New York and other states, where the one-dose vaccine offered a chance to quickly inoculate students before they left campus for summer, appointments were called off en masse.

With only two vaccines instead of three, federal officials expect to have enough doses to cover at most 230 million adults by the end of May, roughly 30 million shy of the total adult population. But despite public campaigns to convince them, a certain share of adults are expected to refuse shots, so that supply may cover all the demand.

Government experts are concerned that doctors may not be trained to spot or treat the rare disorder if recipients of the vaccine develop symptoms. Dr. Marks said that a standard treatment for blood clots — use of an anticoagulant drug called heparin — “can actually cause tremendous harm, or the outcome can be fatal.”

The C.D.C. and the F.D.A. recommended that people who have received the Johnson & Johnson vaccine within the past month contact their doctors if they experience severe headaches, abdominal pain, leg pain or shortness of breath. Officials said the most common symptom of the disorder was a persistent, moderate to severe headache that begins six days or later after the shot.

Dr. Schuchat, the C.D.C. official, said the risk of dangerous blood clots was “very low” for people who received Johnson & Johnson’s vaccine more than a month ago.

In a statement, Johnson & Johnson said it supported “open communication” with health care professionals and the public and had been working closely with medical experts and health authorities, including in Europe. “We have made the decision to proactively delay the rollout of our vaccine” there, the firm said.

The company also said that it was pausing vaccinations in its clinical trials. It is currently testing the effectiveness of two doses, as opposed to the single dose that was authorized in February.

In the United States alone, 300,000 to 600,000 people a year develop blood clots, according to C.D.C. data. But the six cases that led to the pause involved a rare combination of symptoms. The clots occurred in the brain, in a condition called known as cerebral venous sinus thrombosis. The clots were accompanied by low levels of platelets, a component of blood that helps form clots that normally help heal wounds.

All of the women developed the illness within about one to three weeks of vaccination, with a median time of nine days. The hospitalized Nebraska woman is in her late 40s and developed blood clots two weeks after her shot, state health officials said.

The Virginia woman, 45, developed symptoms six days after she was inoculated in early March and died six days after that, health officials said. They said that the public attention is already generating a spate of new reports of possible cases to federal authorities.

Federal officials said there was broad agreement in the senior ranks of the administration about the need to pause use of the vaccine while they investigate whether the blood clots are linked to an immune system response generated by the vaccine.

Dr. Marks said the federal government had not ordered the vaccine’s suspension because health providers may decide that for a particular patient, the benefits of a shot outweigh the risks. “We’re not going to stop that provider from administering the vaccine because it could be right,” he said.

The concerns about Johnson & Johnson’s vaccine mirror those about AstraZeneca’s. European regulators began investigating that vaccine last month after some recipients developed blood clots and low platelet counts like those of the Johnson & Johnson recipients.

Out of 34 million people who received AstraZeneca’s shots in Britain, the European Union and three other countries, 222 experienced blood clots linked to a low level of platelets. A majority of these cases involved women under 60.

On April 7, the European Medicines Agency, the main regulatory agency, concluded that the disorder was a very rare side effect. The European regulators argued that the benefit of the AstraZeneca vaccine vastly outweighed that small risk. Countries in Europe and elsewhere have continued to give the vaccine to older people, who are more at risk from the coronavirus, while restricting it in younger people.

Both Johnson & Johnson and AstraZeneca use adenoviruses to carry DNA into human cells to begin the process of generating immunity to the coronavirus. It is not yet known whether that shared technology causes clotting in rare cases.

Researchers have speculated that DNA carried by the adenoviruses may set off the immune reaction in some people. The condition may be very rare because people have to have some trait — still unknown — that predisposes them to this malfunction.

The first public sign of concern about Johnson & Johnson’s vaccine came on April 9, when the European Medicines Agency announced that it was investigating reports of four cases of blood clots in people who received the vaccine in the United States. One case occurred in the clinical trial that took place before the vaccine was authorized. Three occurred in the vaccine rollout. One of them was fatal, the agency said. The regulators said the cluster of cases required investigation, but that it was not clear whether the vaccine was to blame. 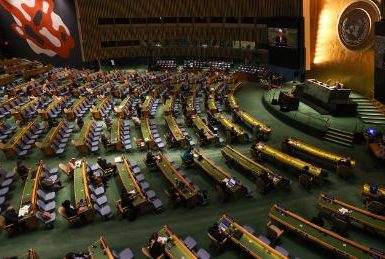