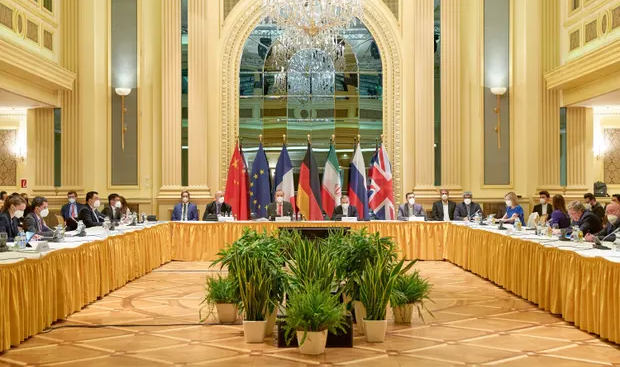 High-stakes talks to salvage the Iran nuclear deal with potentially profound implications for the Middle East will resume on Friday, in what the French foreign minister has called a “moment of truth” for relations between the west and Tehran.

The fourth round of talks have the capacity not just to reduce the risk of nuclear proliferation in Iran, but propel Saudi Arabia and Iran towards softening a rivalry that has darkened and destabilised the region’s politics for a decade.

But all sides admit the Vienna talks are finely balanced and could end without an agreement, partly due to domestic political pressures on both sets of negotiators. A deadline of sorts is looming since an ad hoc agreement struck between Iran and the UN nuclear inspectors ends on 21 May, and if it is not renewed the UN will have little effective access to Iran nuclear sites. The UK foreign secretary, Dominic Raab, has said the talks must wrap up by the start of June.

The Iranian presidential election on 18 June is already destabilising Iran’s foreign ministry, as hardline candidates campaign against a renewed deal and seize on leaked audiotapes of an interview by the foreign minister, Javad Zarif, in which he admitted Iran’s diplomats had always been totally subservient to the Revolutionary Guards.

A US state department official said the pace would have to accelerate but that a deal was doable so long as Iran was realistic and had made the political decision to return to compliance.

“There is a question as to whether Iran understands fully that we cannot get into a situation where the US does more than is required by the deal by way of sanctions relief and Iran does less than is required in terms of nuclear compliance,” the official said. “It is not yet clear that Iran is prepared to recognise those realities.”

Iran’s chief negotiator in Iran and deputy foreign minister, Seyed Abbas Araghchi, is under pressure from the Americans and Europeans to set out the specific steps Iran will take to come back into compliance with the deal, known as the joint comprehensive plan of action (JCPOA), including whether it is prepared to destroy or mothball some of its new advanced centrifuges installed over the past 18 months.

Iran has taken a series of steps away from the constraints set out in the 2015 nuclear deal, including using more advanced centrifuges, arguing it was a legitimate response to Donald Trump pulling the US out of the deal in 2018. The 2015 deal restricted Iran for 10 years to 5,050 IR-1 centrifuges that are relatively antiquated and enrich uranium 10 times more slowly than the IR-6 machines, of which Iran has now installed at least 150.

“The JCPOA is pretty clear what Iran needs to do,” the state department official said. “A plain reading of the JCPOA is clear what Iran’s capabilities can be and cannot be if it is going to be back in compliance.”

He added: “A complication arises from the fact because Iran has acquired more knowledge and done more things than it was supposed to do under the deal. We will have to find ways to address it.”

European nations, now in lockstep with the US, also believe the earlier three rounds of talks placed an excessive emphasis on whether the US will lift all sanctions imposed on Iran, and not enough has been said by Iran on when and how it will fulfil its parallel commitment to return to compliance.

The French foreign minister, Jean-Yves Le Drian, told the Guardian: “We need to achieve some progress urgently because due to Iran’s breaches of its own commitments Iran has never been closer to a nuclear weapon. The US is very determined to make progress – they sent the necessary gesture and signals to show they were ready to take the necessary decisions to lift sanctions. At present Iran has not taken the corresponding gestures or signs about all their breaches of the accord since 2019. This is a crucial moment because it is now that the Iranians must take the necessary gestures.”

The US has agreed to lift most industry-wide sanctions, acknowledging they were imposed after 2016 as a result of the nuclear deal. But the US is less prepared to lift sanctions imposed on individuals and some entities if they deem them linked to Iran’s continuing acts of terrorism or breaches of human rights rather than its nuclear activities. The state department acknowledged further discussions on some sanctions lay ahead.

The US negotiators also do not think it is realistic for Iran to insist that Tehran will only come back into compliance for many months after the US sanctions are lifted. Tehran, burnt by Trump, argues it needs time to verify that sanctions have been lifted. Iran is also seeking a mechanism by which the Biden administration commits to not pulling out of the deal for a specified period.

The Vienna talks are being held between the deal’s remaining signatories: France, Germany, the UK, Russia, China, the EU and Iran, with the US delegation operating from a separate hotel.

Running almost in parallel with the Vienna talks, more secretive discussions between Iran and Saudi Arabia are exploring the possibility of a historic rapprochement. The talks, hosted in Iraq, are not just looking at bilateral relations, but Iran’s regional role, including the role it could play in trying to influence the Houthis to back a ceasefire in Yemen if Saudi Arabia took parallel steps. The US has always said it would like the nuclear talks to evolve into a wider discussion about Iran’s ballistic missiles and regional behaviour.

The talks have been welcomed by the Saudi crown prince, Mohammed bin Salman, in a marked change of tone partly brought on by the demands of the Biden administration.