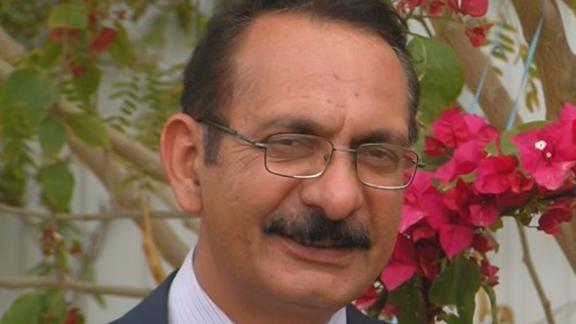 Opinion: 33 years ago, I was in the same room with Iran's new president when he voted to execute political prisoners

Editor’s Note: Mahmoud Royaei was a political prisoner in Iran. He is a member of the People’s Mojahedin Organization of Iran. He has written five books (in Persian) called “The Sun Planters” about his time in Iran’s prisons. The opinions expressed in this commentary are his own. View more opinion on CNN.

August 3, 2021, marked the start of Ebrahim Raisi’s four-year term as president of Iran. The validation ceremony took place in the “Beyt” (Arabic for “house”) of the Supreme Leader, Ayatollah Ali Khamenei, as a prelude to Raisi’s inauguration.

It was exactly 33 years ago, on August 3, 1988, when I found myself in the same room with Ebrahim Raisi. At the time, he was a deputy prosecutor of Tehran and a key member of what was known as the “Death Commission” in Gohardasht Prison located in Karaj – northeast Iran. I was a political prisoner in the middle of serving my 10-year sentence when I first met Raisi, like thousands of other friends and fellow sympathizers of the People’s Mojahedin Organization of Iran (PMOI/MEK), a political opposition group. I was there to hear Raisi decide my fate.

I was struck by his youth almost as much as I was struck by his arrogance, intolerance and thuggish attitude. The effects of this lack of a formal education (it’s been reported that he didn’t go past the sixth grade) were immediately apparent to me. Raisi clearly reveled in having power over life and death, and he wielded it freely in thousands of cases during that summer’s massacre of political prisoners.

On average, the committee made decisions in two minutes, and in almost every instance, the ruling was for the defendant to be hanged by the neck until dead: “Execution, next …”

When asked about his ties to the executions, Raisi told Al-Jazeera, “Everything I’ve done in my time of holding office has been to defend human rights.”

The basis of my 10-year sentence was nothing more than a refusal to submit to the Islamic theocracy or disavow affiliation with the organization. That affiliation meant the explicit denial of many of the regime’s closely-held, backward religious beliefs, such as the notion that Islam requires the forced veiling of women, that women are half the value of men, and that adherents of other religions are “infidels” whose voices must be excluded from Iranian society.

At the age of 18 and for 10 years thereafter, I witnessed those efforts in the regime’s dungeons, interrogation rooms and isolation chambers. The guards used varying sizes of electric cables to beat almost every inch of my body, from the soles of my feet to my neck. After a few dozen lashes, my feet began to swell and my head felt like a balloon about to pop. But even worse than the physical pain was the dread I felt in the waiting rooms, where I and other inmates were forced to sit behind the door, listening to other people being beaten and raped.

Nothing compares to the oppressive silence of solitary confinement. Time loses all meaning in isolation, and eventually, every thought that enters your mind becomes a newfound source of terror. Afraid of losing sanity, you search for absolutely anything that might anchor you to this world. The company of a lowly insect can become your holiest savior.

I, like thousands of other PMOI sympathizers at the time, was charged with distributing the organization’s leaflets, newspaper and statements, and promoting its anti-regime views. But I was not executed simply because I did not outwardly defend the organization as strongly as those who were executed.

Looking back to those dark times, when my fondest wish was simply to feel the breeze on my neck and when my share of sunlight was a small window – seven feet high blocked with steel rods – I never imagined the day would come when I might be able to tell the world about Raisi. But I am also sure that he never thought of the day that he would face the consequences of his actions.

For me, August 3 is already a dark day. Now I believe it will be recorded as a dark day in human history. I truly wonder how many world leaders will recognize it as such, and how many of them will shake hands with Raisi and offer their congratulations for his presidency. For those who have dealt with him personally, Raisi symbolizes the death of hope. His “election” has been widely described as being rigged and orchestrated by Supreme Leader Khamenei, who undoubtedly chose Raisi because their dark vision for the country is similar.

Get our free weekly newsletter

But I still have hope. Through all these years, we have weathered many storms and we braved the belly of the beast … and we’re still standing. I believe the dictator and his henchman have already lost. In 1988, they wanted all the regime’s opponents to repent, to go back to their families and neighborhoods ashamed and broken, telling others that dissent against this regime is useless. What they wanted was not hanging bodies but living corpses, bowed forever. But instead, they faced thousands who remained steadfast and became martyrs for generations to come.

Today, while Khamenei’s loyalists refer to him as the “leader of the Islamic Revolution,” which given his stance, should be “leader of Islamic extremists,” there is a young generation of secular-democratic Iranians rising up from Khuzestan to Tehran, ready to prove that Khamenei’s Beyt is only a house of cards.