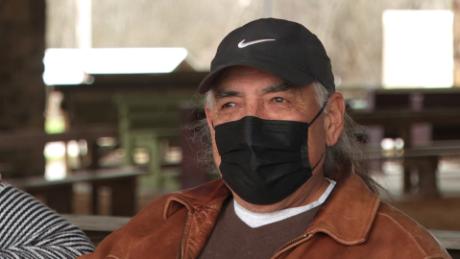 This tribe couldn't find enough Native Americans to vaccinate, so it opened its services to anyone

Apadana Central
7 min read
“I was screaming bloody murder,” Lasley said of the time he almost died from measles at 5 or 6 years old. “That’s one of my first memories.”
His personal trauma made him a strong voice in favor of getting vaccinated against Covid-19, but as a Native American he understands why people in his Osage Nation and other nearby tribes are hesitant.
“Of all people … Native people are the ones that shouldn’t trust the government,” he said, referring to centuries of land grabs, exposure to new diseases, and discrimination from the government. “But in this case, we need to put our trust in science and medicine.”

As a tribal elder, 68-year-old Lasley was prioritized for the shot, ahead of even health care workers. The Osage, in common with other tribes like the nearby Cherokee, looked to protect the guardians of their history and culture first and then move to other parts of the community.
While Native populations were hit extremely hard by the pandemic, tribal health providers have also been successful in getting vaccines delivered and administered. The disappointment now for the Osage is that they have the shots, but not enough arms willing to take them in their northern Oklahoma land. 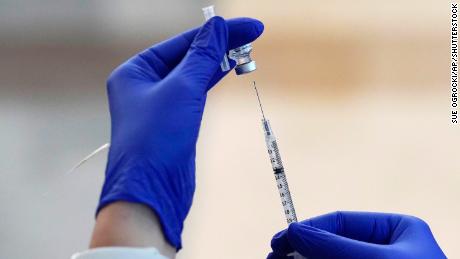 That makes the support of elders like Lasley and the oral tradition of listening and learning from past experiences so important.
Lasley told his story to his daughter, 44-year-old Janese Sieke, who was worried about getting the shot even though she is a health care worker.
“As an employee of the Wah-Zha-Zhe health care center we were one of the first ones offered it. I originally said no,” Sieke said. She was worried there might be long-term side effects that haven’t been seen yet, but after listening to her father she began to be swayed. 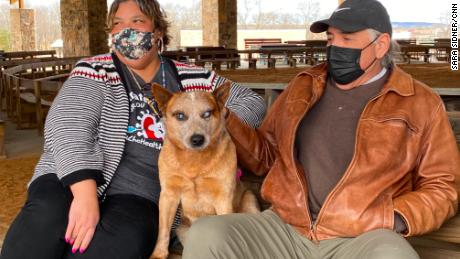 Lasley told CNN how he made the case to his daughter, as the two sat under an arbor used for cultural ceremonies, in Gray Horse, Oklahoma, their blind red-heeler Mick snuggled between them.
“We didn’t have the luxury of having vaccines for smallpox or even flu, measles, all the diseases that were brought from Europe. They had a fresh beginning here,” Lasley said. “And it decimated our Native population so much so that they estimate millions of natives perished.”
When vaccines for those diseases did become available, Lasley says his parents were quick to get them for him and his brother, who had contracted polio before prevention was possible.

Now his daughter has her own story to tell about why she got inoculated as she works at the vaccination site to check details on those coming for a shot.

The coming of government … and death

That conversation is just one of many happening in the Osage Nation about coronavirus and the vaccine and they don’t all end with the same result.
“Thirty to 40% of elders that we contacted did not want the vaccine at that time because of vaccine hesitancy,” said Dr. Ron Shaw, chief medical officer for the Osage Nation. “The reasons range from worries it was rushed to market, to side effects.”
Shaw and the tribe’s leadership, including Principal Chief Geoffrey Standing Bear, try to calm fears with scientific facts while also understanding that people will make up their own minds.
“Historically there is an association between the coming of the government and death,” Chief Standing Bear told CNN. 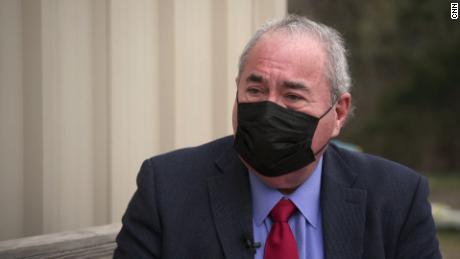 “From 1820 to 1900, 75% of my people died of disease — smallpox, measles, typhus — and the government of the United States brought these with them,” he said.
And in the 1920s, the Osage say they lost a battle to another disease — greed. At that time, they were some of the richest people per capita in America, when minerals and oil were discovered under reservation land they had purchased. White Americans flocked to the area, doing their best to cajole, swindle, control or marry into the wealth — even murdering to get the rights to the oil, said Carol Connor, who runs the Fairfax Chief local newspaper.
“A block and a half from where we’re sitting, a house was blown up as an attempt to murder Osages for their land and money,” Connor told CNN from a tidy home converted into the newspaper’s offices in Fairfax, Oklahoma.
Connor says there remains an undercurrent of suspicion between Osage and non-Natives, even decades later.
“We have a community where we have some people whose families might’ve been part of the murderous past, and we have some people here whose families might have been victims of those murders,” Connor said.
Standing Bear notes that any hesitancy in his family is a mix of the old mistrust and newer concerns, some of which are misinformation and even conspiracy theories.
“The older people that I know did not hesitate and my younger ones are exercising their right of choice,” he said. “The younger generation who have been politicized do not want to get it.”

Everyone CNN talked to over two days on the reservation knew someone who had contracted Covid-19, some of them who had to be hospitalized, some who did not survive. National figures from the Centers for Disease Control and Prevention show Native people are four times more likely to be hospitalized because of the virus and twice as likely to die from it compared to their White counterparts.
But the hesitancy has meant the tribe’s vaccination site has been giving about 200 shots a day when they had the capacity and supply for 500.
So it was decided to expand outside of the Osage Nation, which has about 20,000 people, split between those on the reservation in northern Oklahoma and those who live across the country. 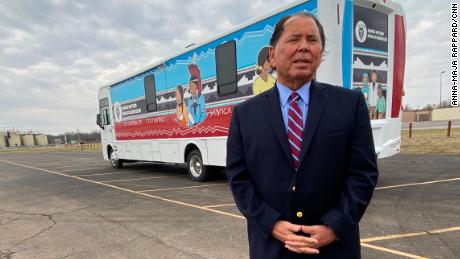 For the first time, the Osage health service opened up to non-Native people. They would vaccinate anyone 18 or older. No appointment or proof of local residency needed.
To make it even easier, they bought a mobile medical unit to reach the more rural areas, where plains of red-tinged grass are dotted with cows and the occasional oil derrick pumping away. They figured if people weren’t coming to them in droves, they would go to the people.
“We’ve tried to remove all the obstacles, including perhaps insufficient education or knowledge of the facts,” Shaw said. “But we still have a long way to go with it.”
The vaccine bus stood out on its first voyage to more rural areas this week. It’s brightly painted with Osage art and impossible to miss on the country roads across the wide open space of the reservation. 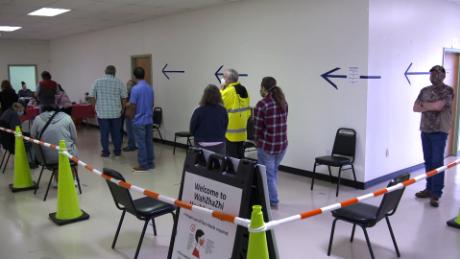 Marcia Pryse said the opening up of the vaccination program by the Osage was a godsend for her and her husband. After not being able to schedule closer to home, they drove over an hour to get to the Osage vaccination site in Pawhuska to get their first dose of the Moderna vaccine. They waited about 15 minutes before getting their inoculation.
“I am so grateful,” said Pryse, who suffers from multiple sclerosis. “It sounds funny, but I really was excited about it because I haven’t gotten good, full-on hugs from my kids in so long.”
The couple are now two of 3,079 people who have had at least one dose from Osage medics.
And health care worker Sieke now believes that will make everyone safer.
“In order to protect Indian people we have to think of the people who live among the Indian people too,” she said.
Her father, who encouraged her, added: “We are all in this together. And we need to protect one another.”