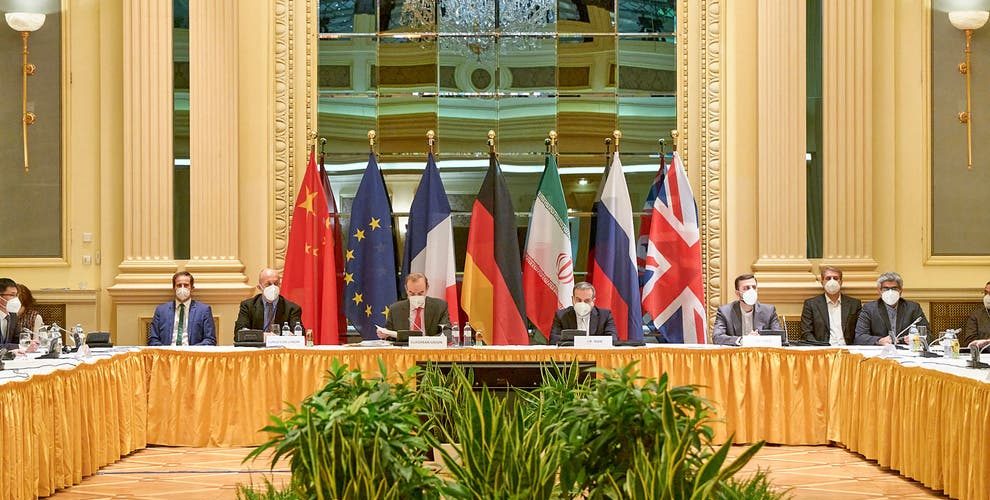 Vienna talks meant to revive and restore the 2015 Iran nuclear deal appear to be going well, according to assessments by both American and Iranian officials, as the latest round of negotiations drew to a close.

Iran’s president Hassan Rouhani said in a speech on Wednesday that the Americans “appear to be serious” about lifting sanctions imposed by the former administration of Donald Trump.

And though Iran’s chief negotiator Abbas Araqchi warned that Iran would abandon talks if United States demands became excessive, the reformist daily newspaperEbtekar said the “anti-Iran coalition was on its last breath” and that reviving the deal  was “in the home stretch”.

US State Department spokesman Ned Price described the talks as “businesslike’’ and “positive” in a briefing on Tuesday. “There has been some progress, but there remains a long road ahead,” he told reporters. “And I think it’s fair to say that we have more road ahead of us than we do in the rear view mirror.”

Talks are to resume next week in Vienna, with Mr Araqchi leading the Iranian delegation, diplomat Robert Malley leading the US team, and German, French, British, Chinese and Russian officials serving as intermediaries.

Enrique Mora, chairman of the commission overseeing the talks, said in a statement that progress had been made in identifying specific measures the US and Iran each need to take to return to the deal, and that a group of experts would start examining timing and sequencing next week.

Meanwhile, anti-Iran operatives in Washington are stepping up efforts to scuttle the negotiations.

The Joint Comprehensive Plan of Action (JCPOA) placed limits on Iran’s nuclear programme in exchange for relief from international sanctions. Mr Trump torpedoed the deal and launched a campaign of “maximum pressure” meant to economically strangle Iran, which responded by upping its nuclear programme. The administration of Joe Biden is seeking to return to the deal and has sought talks with Iran.

The latest relatively upbeat pronouncements contrast with the gloomier comments in recent weeks. They came days after Iran announced that it would enrich uranium to 60 per cent purity, a higher level than it had ever produced, in response to a suspected 10 April Israeli attack on its sensitive enrichment facility in Natanz.

The attack, which took place as US defence secretary Austin Lloyd met in Israel with its prime minister Benjamin Netanyahu, may have been meant to scuttle the talks, which Israel vehemently opposes. Instead it appears to have added urgency to diplomatic efforts to revive the deal.

On Sunday, US national security adviser Jake Sullivan appeared to signal a retreat from the position that Iran would have to roll back its programme before sanctions were removed, saying only that the US must have “clarity and confidence that Iran will fully return to compliance with its obligations”.

Iran appears to have also scaled back its demand that sanctions removal must be “verified”, noting that such verification would merely mean approval by ministers and the Central Bank governor.

Iran says it is seeking a detailed list of sanctions that would be lifted before it begins to roll back its nuclear programme.

“Every sanction that will be lifted has a number and must be put down on paper,” Mr Rouhani said on Wednesday. “Otherwise we’ll get stuck in the generalities because the details aren’t clear.”

Some US factions remain vehemently opposed to the nuclear talks. Republicans led by former secretary of state Mike Pompeo are today introducing what they call the Maximum Pressure Act, a bill which would codify and expand sanctions against Iran and bring a halt to the ongoing talks in Vienna.

But the Biden administration appears set to defy the hawks. “[Maximum pressure] was supposed to deliver a better deal, a stronger deal, a longer deal with Iran,” said Mr Price. “It was supposed to cow Iran and its proxies. It was supposed to bring us together with our allies and partners around the world. In fact, all of those things, the opposite has come true … And in fact, Iran accelerated its nuclear programme and enacted measures that would have been prohibited under the JCPOA.”