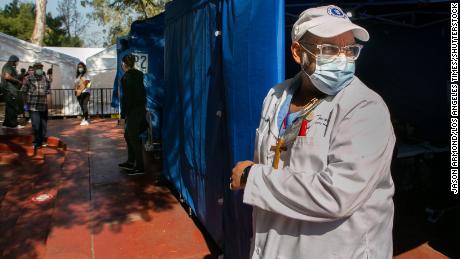 Apadana Central
6 min read
Abraham has spent the last several months calling state officials to demand vaccine doses for Black and brown people in hard hit South Los Angeles, developing vaccine sites that welcomed walk-in patients, hosting mass vaccination events featuring entertainers and deploying mobile vaccination fleets to neighborhoods where residents don’t have transportation.
Abraham, director of vaccines at Kedren Community Health Center, said he is now vaccinating 5,000 people a day and filling a void in a community that might otherwise be neglected.
“We broke down every barrier that stood between people and their vaccines,” Abraham told CNN. “No appointment, that’s OK. No internet or email, phone or transportation, can’t walk, talk or see, can’t speak English, undocumented, homeless — none of those things were barriers.”

California remains one of the states with the worst disparities in vaccinating its Latino population despite efforts like Abraham’s and a statewide mandate that allocates 40% of vaccine doses to underserved communities. According to state data, 20% of vaccine doses have been administered to Latinos, who make up 39% of the population and 56% of cases. And 3% of vaccines have been administered to Black people in California, who make up 6% of the population and 4% of the cases. White people, meanwhile, have received 29% of vaccines and make up 20% of cases and 37% of the populations.
Health advocates say misinformation about the vaccine and lack of access have been key reasons for the racial inequities in California. Now they are urging the state and its partners to boost vaccination efforts in communities of color to prevent the disparity from growing when all California adults become eligible for the shot on April 15. Some fear that residents with reliable internet, transportation and the ability to take off work will continue to outpace poor Black and Latino communities that have been among the hardest hit by Covid-19.
California officials were blasted earlier this year when when a vaccine program meant for seniors living in Black and Latino communities was misused by outsiders who obtained the special group codes needed to schedule appointments. 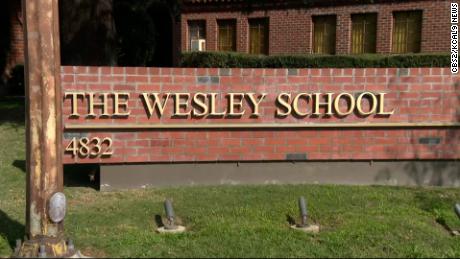 Gov. Gavin Newsom responded saying the group codes were being abused and that the program would switch to individual codes. About a week later, Newsom’s administration announced it was setting aside 40% of vaccine doses for hard-hit communities.
“Vaccinating our most impacted communities, across our state, is the right thing to do and the fastest way to end this pandemic,” Newsom said last month.

Dr. Manuel Pastor, director at the University of Southern California’s Equity Research Institute, said while the state is improving its efforts to vaccinate more people of color, the initial vaccine programs were “deeply flawed.”
Pastor said many of the sites failed to consider essential hourly workers who are largely people of color, residents without internet or smartphones, and families without vehicles.
“It was a system that was destined to produce vaccine inequity,” Pastor said.
Pastor said if California wants to close the racial gap in vaccinations it needs to engage more employers so people feel comfortable taking off work, build more sites on public transportation routes and appoint trusted messengers who can convince Latino residents that the vaccine programs are not connected to immigration authorities. 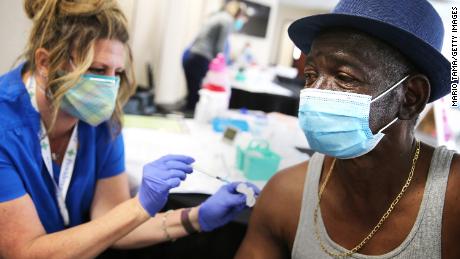 Kiran Savage-Sangwan, executive director of the California Pan-Ethnic Health Network, said California needs to maintain its focus on equity in the coming weeks because she expects many residents will be racing to get the vaccine appointments once all adults are eligible.
If there is enough vaccine supply for all adult residents, the state should be working with community partners to get the shots to neighborhoods with lower vaccination rates, she said.
“Unfortunately, we are not seeing progress in closing that gap so that’s something we really want to see the state look into more to better understand why we’re not seeing a change over time there,” Savage-Sangwan said. “Because we would expect one given where we have put a significant share of the doses.”

Meeting people where they are

Grassroots organizations across the state have popped up to help residents book vaccine appointments, many of which are only available online through a lengthy sign-up process.
Groups such Get Out the Shot: Los Angeles are hoping to remove barriers to getting these appointments by mobilizing their volunteer network to help people across the city find a shot. Co-founder Elizabeth Schwandt, who lives in the Lincoln Heights neighborhood in Los Angeles, said the group came together in early February amid concerns about appointment accessibility.
“All of the systems in place are relying on a good internet connection, a printer and the wherewithal to know that these vaccines are available,” Schwandt said. “Even the savviest people around us were struggling, so we knew there was going to be a huge gap.”
The group uses a hotline and email address, which people can contact if they need assistance booking a shot or understanding the state’s eligibility tiers. Schwandt said the group has about 400 volunteers who speak at least nine different languages, and that together they have helped more than 10,000 people book appointments.
However, with vaccine eligibility opening up widely, Schwandt is hoping the group will be able to scale up its volunteer efforts, since a flood of people looking for vaccines may create more barriers for underserved communities.
“It’s just going to get harder for the people we’re trying to help — we don’t anticipate our work receding,” she said.
Some Black communities in the Los Angeles area continue to see disparities because there are no pharmacies or health care facilities within a reasonable distance and many families don’t have Wifi access, said Rhonda M. Smith, executive director of the Black Health Network.
There are also people of color who remain hesitant to get the shot. Smith said some are buying into myths about the vaccine or are concerned the nation’s history of racism in health care. She said communities need to expand efforts to promote accurate information about the vaccine that assures people of color there are safeguards in place to prevent the Tuskegee experiment from happening again.
“There are many more regulations and patient protections in place these days,” Smith said. “But there are some people that just are resistant and they are never going to do it.”
Meanwhile, Abraham is continuing to launch more vaccination programs in South Los Angeles so when people of color are ready to get vaccinated, they have easy access. He recently partnered with Charles R. Drew University of Medicine and Science — a historically Black college — to create a vaccine program in Compton, a city with a large Black population.
Abraham said closing the gap on vaccine equity will require health care providers to meet people in church parking lots, parks, beaches and workplaces. The challenge, however, is that Kedren needs more doses, volunteers, vehicles and the capacity to store more vaccines, he said.
“There are a lot of moving parts and it is very complicated, it is frustrating,” he said “But it is the commitment that we’ve made and it’s what we have to do to do this right.”