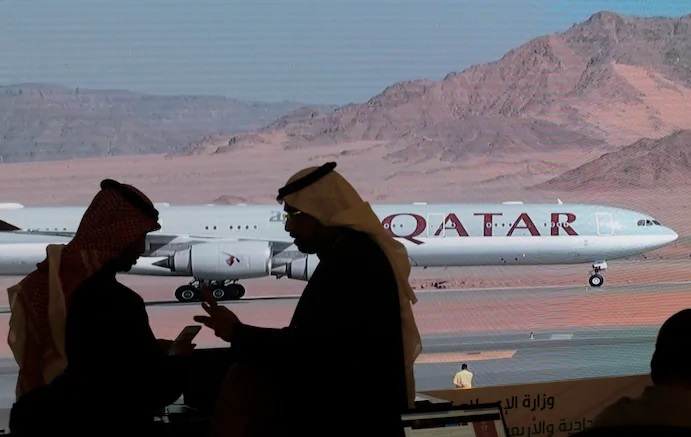 Journalists chat as video of a plane carrying Qatari Emir Sheikh Tamim bin Hamad Al Thani is shown on a screen while landing at at Al Ula airport, where the 41st Gulf Cooperation Council (GCC) meeting takes place, in Saudi Arabia, Tuesday, Jan. 5, 2021. Al Thani’s arrival in the kingdom’s ancient desert city of Al-Ula on Tuesday was broadcast live on Saudi TV. He was seen descending from his plane and being greeted with a hug by the Saudi crown prince. The diplomatic breakthrough comes after a final push by the outgoing Trump administration and fellow Gulf state Kuwait to mediate an end to the crisis. (Amr Nabil/Associated Press)

The decision to restart commerce and travel would take effect on Saturday, Foreign Ministry official Khalid Abdullah Belhou was quoted as saying by the UAE’s state-run WAM news agency.