Trump schooled his protégés well in the politics of misinformation, but the test will be if House GOP leader Kevin McCarthy can win the speaker's gavel next year 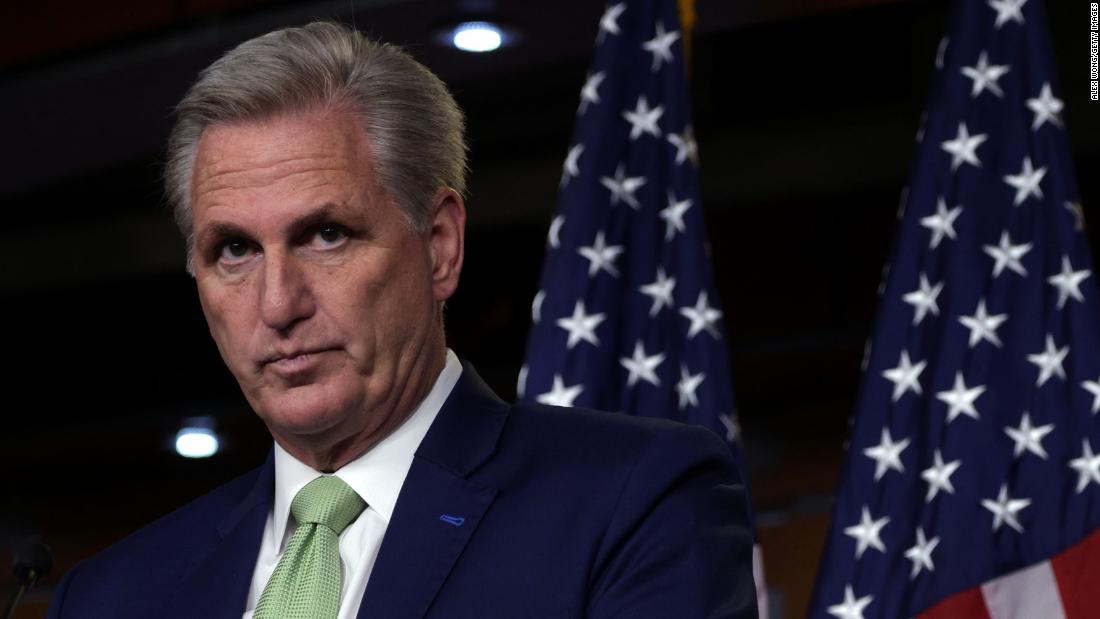 The ex-President’s Washington devotees and media backers are proving they don’t need him in the White House or blazing away on Twitter to stir his stew of lies, false realities, assaults on democracy, circus politics and racial grievance. The test of their approach will not be in whether it true. It’s whether it works in helping House Republican leader Kevin McCarthy, who has anchored his own reputation to the autocratic and vengeful ex-President, to win the speaker’s gavel next year.
It’s not as if unchained lies and cartoonish antics are the only options for the GOP.
Sure, Democratic President Joe Biden has spent his first 100 fays offering the kind of governance — in the face of the worst public health crisis in 100 years — that Trump jettisoned as soon as he figured it might hurt him politically. But it’s an open question if ex-Republicans who took a chance on Biden after being alienated by Trump all favor the multi-trillion dollar makeover of the US economy and society the President plans. Midterm voters are moreover often receptive to the idea of reining in presidents who appear to over read their mandates.
With this in mind, Republican House No. 3 leader and Trump heretic Liz Cheney of Wyoming argued Monday that Biden was pursuing “even farther left policies than we could have anticipated and certainly than he campaigned on.” The right’s favorite hate figure — Rep. Alexandria Ocasio-Cortez, a New York liberal — nailed the case shut by saying that progressives expected a “more conservative administration.” The GOP also has an opening on Biden’s handling of a surge of child migrants across the southern border, his efforts to renew a nuclear deal with Iran and reverse Trump’s disruptive foreign policy.
Yet the approach of most of the Republican Party, which remains dominated by an aberrant ex-President who insulted his country’s founding values by trying to steal an election he lost, is closer to caricature than a principled conservative case for alternative government.
Republican voters are being falsely told that Biden is coming not just for their guns, but for their burgers as well; that a President who wants to spend billions on helping working Americans actually wants to tax them into destitution, rather than making life a little less comfortable for the one-percenters rewarded by Trump.
The attacks are sometimes not consistent, but they create a flagrant false narrative anyway. Biden has for example managed to pass a $1.9 trillion Covid relief package and, with his massive social safety net bills, is doing a passable impression of Franklin Roosevelt and Lyndon Johnson. Not bad for a President who, according to Trump’s supporters, is senile, doesn’t know where he is and can barely string a sentence together.
Again, the truth is not important for Trump’s most prominent followers — throwing out enough misinformation to cause doubt, cynicism and confusion is the aim.

The 45th President’s departure has hardly halted the conservative culture wars. Instead, it has merely brought new actors to center stage as they add their voices to the barrage of falsehoods.
Some of the ex-President’s fans took to Fox News and social media to assault the motives of jurors after the murder conviction of Derek Chauvin, rather than dwell on the horror of George Floyd’s agonizing death with a knee on his neck.
There’s Fox star Tucker Carlson, who endorsed the racist “great replacement” conspiracy theory embraced by White nationalists, which claims that Democrats are importing developing world immigrants to dilute the votes of Americans.
Others are busily trying to create a new truth to deny the actions of the mob that surged into the US Capitol after he told them to “fight like Hell” to reverse his election loss.
And one of the ex-President’s chief apologists on that issue is Wisconsin Sen. Ron Johnson, a Republican who has now turned to undermining the Covid-19 vaccine drive. Trump’s favorite hosts on Fox used Monday night to lay another thick fog of misinformation on masks ahead of a Biden speech on the issue on Tuesday.
Across the nation, pro-Trump state lawmakers are effectively making it harder for Black Americans to vote and argue they must act to reassure those who distrust the electoral system — largely because of Trump’s flagrant lies. Perhaps most perniciously, Trump’s cronies are carrying out a sham recount of the long-settled election in Arizona. It won’t put him back in the Oval Office but will further torch US democracy to soothe a beaten leader’s vanity. Social media firms and media that point out Trump’s obvious lies are accused of censoring or “canceling” conservative voices.
Democrats, according to Trump partisans, want to get rid of the police entirely, not introduce reforms. Never mind that they are working with GOP senators to ban officers from using choke holds and make it easier to prosecute bad cops after Floyd’s death.
Given that this brand of stunt and grievance politics in recent years lost the Republicans the House, the Senate and the White House, it might seem like a bad bet. And Biden’s approval ratings, higher than Trump ever managed — especially on the pandemic — suggest that the public prefers a president that doesn’t impose his towering ego on the country, or openly lie and stoke the most aching national divides before breakfast. Biden has also deliberately carved out a persona as a fixer who is merely trying to get the country back on its feet.
History however suggests that, whatever happens, a first-term president tends to get a hammering in midterm elections. And Democratic majorities are so slim that even a swing of a few points away from the President could leave him hostage to a Republican House and Senate from January 2023.

Census shows a shift in power

The implication of new census data released on Monday could also be grave for Democrats as it showed population shifts from the Midwest and Northeast towards Trump country in the south.
The data generally supported expectations that the GOP could net up to a handful of House seats in the 2022 midterm elections. Given their single figure majority, that could mean big trouble for Democrats. Midterms are often what political scientists refer to as base elections, meaning that only the party’s most committed partisans show up. If that’s the case, keeping Trump’s millions of supporters outraged and looking for revenge could be a decisive strategy for Republicans and will require Democrats to be equally as excited to shield a President who won’t be on the ticket.
McCarthy, who for a short while condemned Trump’s actions ahead of the storming of the Capitol on January 6 before making a pilgrimage to Mar-a-Lago, has clearly run all these calculation in his head. He came across in a just-published New York Times profile as half-committed to a Faustian pact to wallow in Trump’s lies to fulfill his ambitions of being speaker and half-cowed by the ex-President’s fury.
It’s not a given that Republican tactics will succeed. If Biden manages to navigate the country out of the pandemic and into a new economic golden age, he will have a powerful case to make to up-for-grabs suburbanites who might again prove electorally decisive in 2022.
And while Trumpian excess might help House candidates stave off primary challenges from the right and electrify comparatively small electorates in their districts, the strategy might backfire among bigger Senate electorates. And a cadre of Trump-style candidates in swing states could scare off moderates and complicate a map already challenging to Republican Minority Leader Mitch McConnell’s hopes of winning back the Senate.
But since Trump remains highly popular among the Republican base, has no plans to go away and — as always — is using his party as an instrument of his personal revenge, it’s the only strategy the Republicans have.