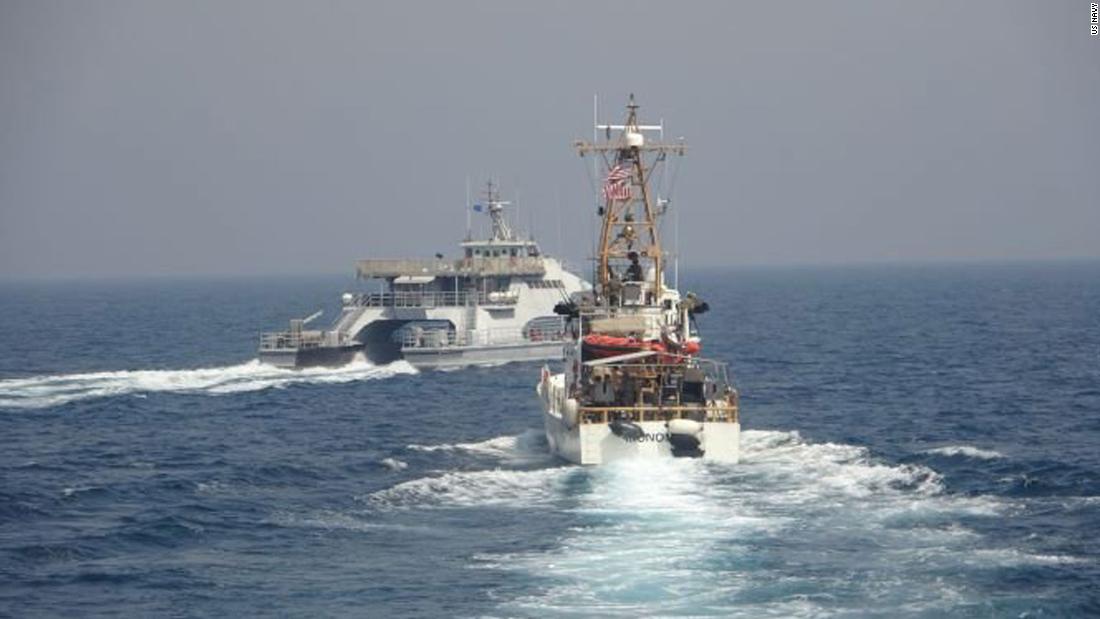 The Coast Guard cutters Wrangell and Monomy were operating in the Persian Gulf on April 2 conducting routine maritime patrols in international waters when the Iranian ships, including three fast attack craft and a catamaran support vessel known as a Harth 55, approached the American ships, according to a statement from Fifth Fleet Spokeswoman Cdr. Rebecca Rebarich.
“The Harth 55 closed aggressively on Wrangell’s bow, resulting in Wrangell maneuvering to avoid collision while sounding five short blasts from the ship’s horn,” Rebarich said.
The Iranian ships harassed the Coast Guard cutters for approximately three hours, Rebarich said, during which the US ships issued bridge-to-bridge warnings and sounded five short blasts from the ships’ horns. The Harth 55 came within 70 yards, or less than a football field, of both ships.
Rebarich said that the Iranian actions “were deemed unsafe and unprofessional,” increasing the risk of collision. In addition, the actions of the Iranian ships ignored internationally recognized maritime customs and international regulations for preventing collisions at sea.
The Coast Guard ships are part of Patrol Forces Southwest Asia, the largest Coast Guard unit outside the United States. The Wrangell and the Monomoy are 110-foot Coast Guard cutters with shallow drafts, able to operate in the waters of the Persian Gulf.
News of Iran’s actions come as the country, US and other world powers continue talks over the Joint Comprehensive Plan of Action (JCPOA), the nuclear deal signed in 2015. US and Iranian officials said last week progress has been made in talks about rejoining the nuclear deal.
It also follows leaked audio of Iranian Foreign Minister Javad Zarif criticizing the IRGC and assassinated top general Qasem Soleimani. In the three-hour interview recorded as part of a research project by Iranian journalist and economist Saeed Laylaz, Zarif said that Soleimani was directing foreign policy and attempting to sabotage the JCPOA and that Iranian diplomacy had been undermined and overshadowed by the military’s actions, especially in Syria, where the IRGC aided President Bashar al-Assad to crush a rebellion against his rule.